It's a web app tool for drawing blueprint maps for the ALIEN RPG. The maps have a retro feel like the ones you can find on the core rule book.

absolutely amazing! Can images created be used commercially? Like if I create a sci fi adventure module for a community content program?

@Delacannon I'm having trouble loading saved ships.  The save appears to have worked, generating what looks like json at first glance, but loading doesn't seem to do anything other than remove the drag-and-drop overlay.  =[

OK, I've found some of the problems.  First, the saved file was missing the ',"extension":"999"' clause that I see at the ends of smaller files I've saved.  I added that and the saved map loaded.

Second, all of the props I added with the x axis mirrored loaded with the original rotation, so a bunch of the diagonal bits are going the wrong way and some doors are on the wrong side of the squares.

Several of the icons were listed as '\"visible\":false' which makes me wonder why they are still in there at all.  Maybe lazy deletion?  In any case, I tried a simpler repro map and the invisible icons didn't seem to break anything.

Finally, something I noticed while playing with this is that the prop in row 2 col 1 is just a tiny dot, which is not very useful, and the first two columns of row 4 are repeat triangles.  I would have instead found it much more useful to have a thin top line to mirror the thin bottom line, but I'm sure everyone has their own preferences.  It would be pretty great if we could load a different base props image though.   =]

Hey I have been having the consistent problem of the NEWT Blueprint Builder being stuck on the loading screen. Any fixes? Its on any browser, after I've cleared history or more, etc.
Otherwise this has been a great tool to make small ships for my Mothership RPG games!

Does anybody have a props guide or description on how to use and the the specific purpose of all them?

Would love to see a round shape brush instead the only squared one.

Can you advice user that right clic is the delete tool?

I cant open the editor. It gets stuck on the loading screen :(

Hey, don't know if you read this anymore but I made a tool that uses the exports from NEWTBB to build 3D ship models:
https://shipwright.weylandyutani.company/dist/

I really wished this exported images sized correctly for roll20 lol. This is an awesome tool, bit buggy with the symmetry tool not saving properly.

Hi, I noticed that you have a prop for a line at the left, right, and bottom of a square, but no corresponding top line. Can you add that please?

Love the tool, it's amazing. I've generated a map which is awesome, but I'd like to continue using the font in the rest of my document. Is it available anywhere?

Wow, this tool is awesome.

Hey! Good recommendations! I have included a function to save and load maps. Press F1 to save a .newtbb file and press F2 to load the file. You can also share the file with other people so they can load your map on another instance of the tool.

thanks for this great tool! I just randomly moved and clicked with my mouse and then I just created corridors to connect the few isolated points and now I got a cool map!

How do I upload an image saved here? So I can continue editing.

Hi, I have updated the tool with this feature

I really like the look of this map, but I'm struggling to understand how the example map was created. I see thick lines for the walls, and the props that match them, but I don't see the icon to use for the thick, angled corners. Thin, angled corners - no problem! Am I missing something obvious? (Thank you for creating this tool. I really appreciate it!)

Hi! The example map was probably made before the latest updates. I was using a different texture that had a thicker border. What you are trying to do can't be done yet. Maybe I should change the example map so it doesn't lead to confusion.

This is wonderful! Two questions.

1) Can I use maps created with this tool in commercial products? Likely just Mothership adventures posted here on itch for a buck or two.

Yes! You can use the tool for any purpose, even commercially.

At the moment I have the last version on hold. It includes many new features. Once I find a moment to clean up the code, I'll upload it to github. Anyway any suggestions are welcome.

One suggestion I have: When I hover over the icons, it gives me a description.  It would be nice if it did the same with the props (if you used these for specific purposes). And perhaps the ability to save as you go in case you can't complete your schematic in one sitting.

And perhaps something that makes the icons snap to an even grid IF toggled. Sorry, last suggestion.

Amazing! Look forward to seeing how it develops 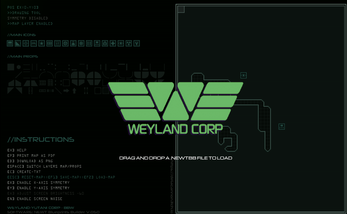 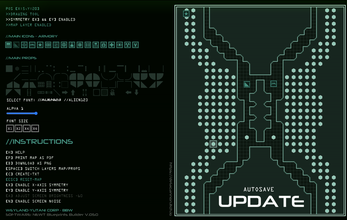